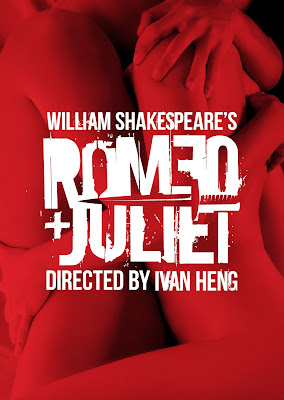 father and refuse thy name...”
-William Shakespeare, Romeo and Juliet, 2.2


"What's in a name? That which we call a rose by any
other name would smell as sweet"
- William Shakespeare, Romeo and Juliet, 2.2

Two of the most famous lines from Romeo & Juliet ... in fact two of the most well-known quotes of Shakespeare (ed : what about 'to be or not to be’). How many times have we heard these lines? They have been used countless times in movies, songs, adverts, books, speeches etc.  Even I used to be able to sprout these and a lot more quotes from R & J, not because I was some intellectual romantic .. but because I studied literature for my ‘O’ levels and this was one of the books we were dissecting. I bet many of you guys also had to do some Shakespeare book for your ‘O’s. Pity those who had to do Macbeth and Hamlet .. super boring and super lots of lines to memorize ...


I enjoyed the two years reading / memorising / quoting / discussing / debating / analysing R & J in school. R & J is IMHO the easiest and shortest of all of Shakespeare’s plays. It is easy to digest without much problems with the unabridged version. However, as I am from the 20th century (albeit the back end), I never had the opportunity to catch R & J being performed live. I thought the movie version was WAY too stylized and I personally do not think that Leonardo de Caprio can act !! So this is the best way to enjoy it being acted out the way Shakespeare may have done. I am pretty confident that if anyone can pull it off .. Mr Ivan Heng can. Looking at his many, many directorial successes, R & J should be well done and a feast for the senses.


I have always felt that R & J is not just about the “star crossed lovers” but included the supporting cast and their little character nuances. The Machiavellian nature of Mercutio ... the loving-doting nature of Nurse .. the hot headedness of Paris .. the stubbornness of the Capulets all come together to bring the play to life and bring out the best of Romeo and Juliet. It is no wonder that in this rendition, the supporting cast are played by well established actors such as Kay Siu, Wendy Kweh, Swee Lin, Brendon Fernandez and Yu-Beng. Romeo will be played by Hansel Tan and Juliet by Julie Wee.  I have to admit I have yet to see Hansel and Julie perform but their theatre CV looks very impressive.


I have been waiting almost 20 years to finally catch R & J performed live and am very much excited about it. The last theatre I caught was Pangdemonium’s Spring Awakenings which was also about young lovers, forbidden love (in a more physical sense) and the emotional trials and tribulations of growing up. It would be a pretty far stretch to compare Spring Awakenings to Romeo & Juliet but there are its similarities .. and don’t forget, life during Shakespeare’s time was far simpler ... stay tuned for my review and will update any information when I get it ...

All the world's a stage, And all the men and women merely players.
They have their exits and their entrances;”

Posted by Unknown at 6:25 PM No comments: 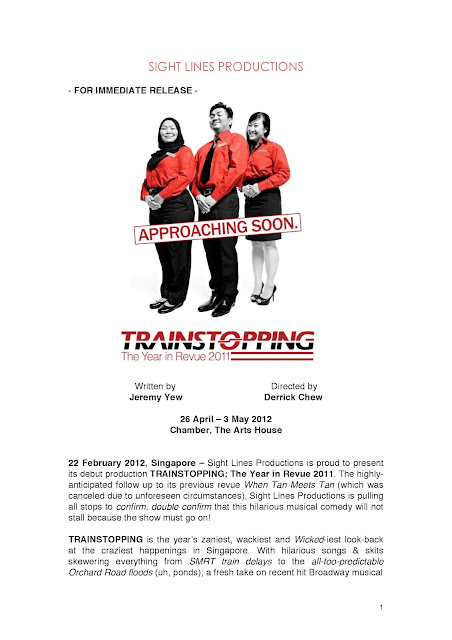 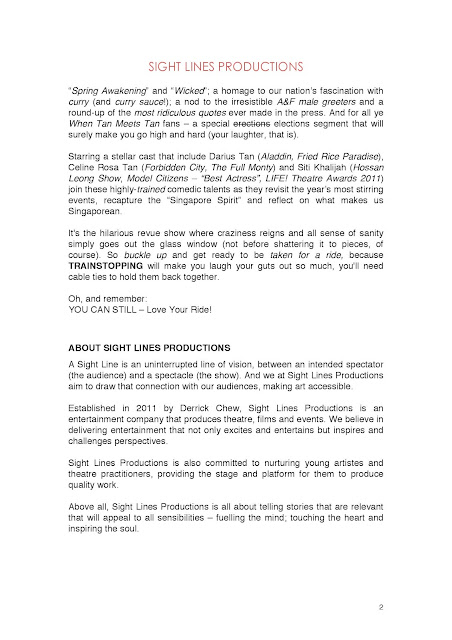 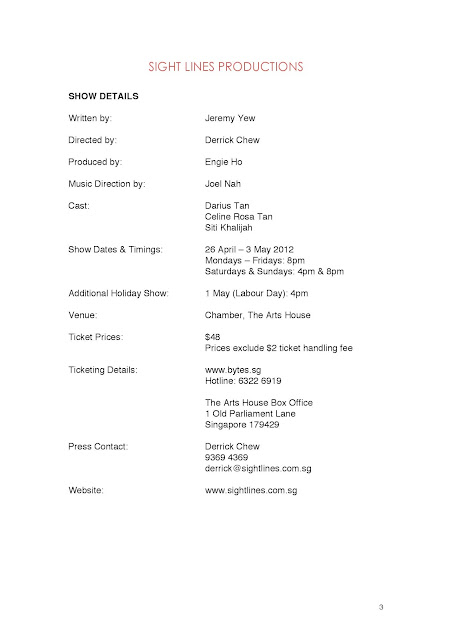 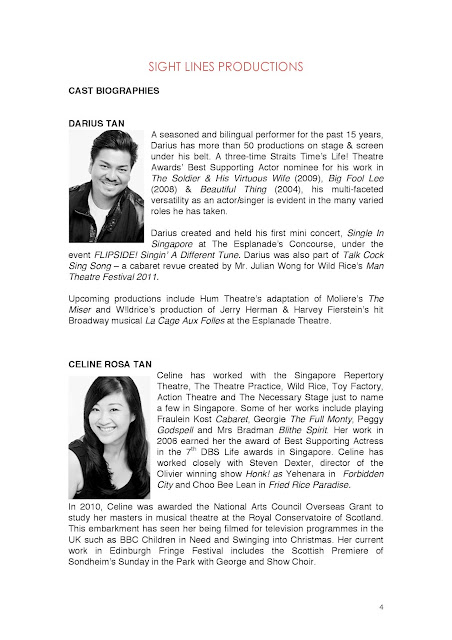 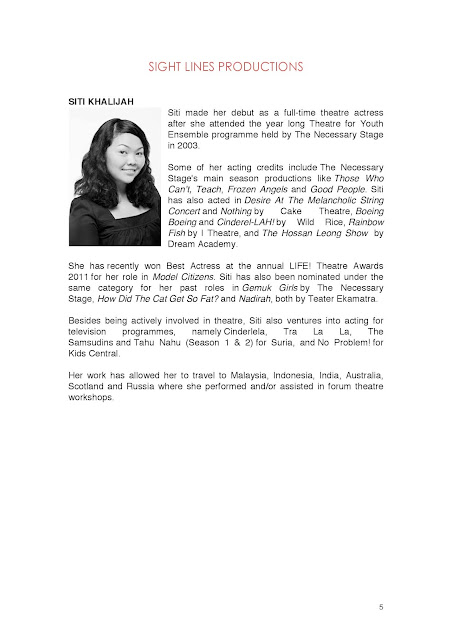 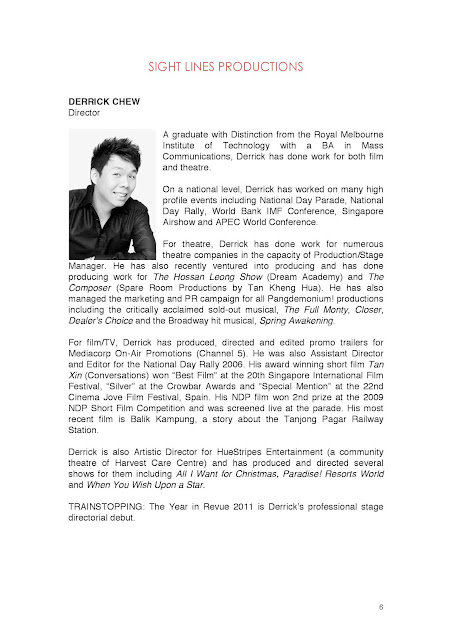 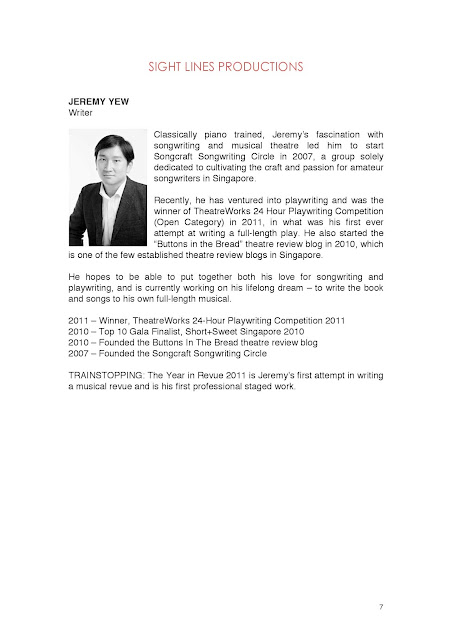 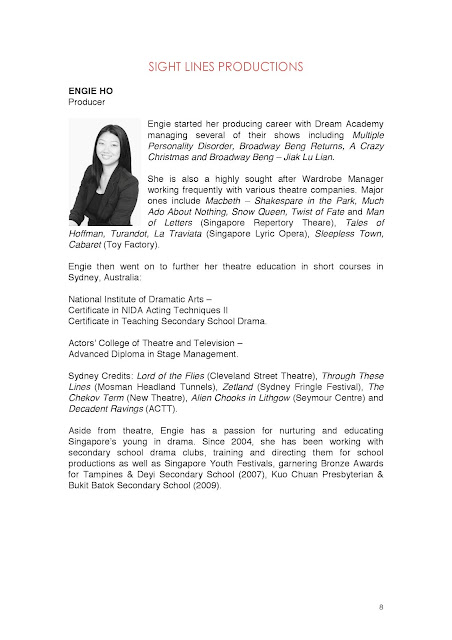 MRT getting you down? Go catch Trainstopping and laugh your frustrations away !! 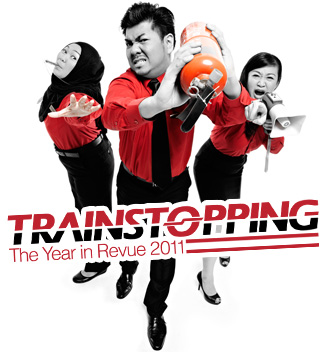 Coming soon is “Trainstopping : 2011 in Revue” at The Arts House end April for a run of about 10 days. So far all the information I have received has been via the press release but if the show is ass funny as the press release .. it will definitely be worth watching !!!


The all-star cast of Darius Tan, Celine Rosa Tan and Siti Khalijah will definitely have you LOL-ing all over the place. I have seen Darius in “Aladdin” and I personally thought he stole the show (you can read my review somewhere in my blog .. shameless) .. I have seen Celine in Fried Rice Paradise and in The Full Monty .. she is super versatile and crazy. Finally, caught Siti in Boeing Boeing and Gemuk Girls just to mention a few. The 2011 LIFE! Theatre Awards Best Actress is such a natural with her expressions and her delivery. I am now just trying to picture all three of them together .. it is gonna be hard to keep up with them ..
The songs and lines will be written by Jeremy Yew. Jeremy is the guy behind the now widely read “Buttons in the Bread” blog .. (I have to admit.. I got my inspiration for my blog from Buttons). This is his first professional staged work but seeing how talented his writing is, this will be great.

Derrick Chew is the director for Trainstopping. Like Jeremy, this is his professional stage directorial debut. Let this not fool you as Derrick is already a veteran of the Arts here in Singapore as producer for several sold-out shows such as The Hossan Leong Show, The Full Monty and the recently concluded Spring Awakening.

Considering the stellar cast and production team ...  I am the first to say that this show will be a hit and hopefully it can slowly be expanded to a yearly event.

WANNA WIN A PAIR OF TICKETS TO TRAINSTOPPING?


Simply LIKE their facebook page (https://www.facebook.com/SightLinesEntertainment) and stand a chance to win a pair of tickets to the Gala performance of Trainstopping worth $100! Go Go GOooooooooooooo !!! Just a mouse click away ..............