Good Evening Ladies and Gentlemen. Fasten your seat belts, lean back and let W!ld Rice Airlines take care of all your entertainment needs - My Review of Boeing Boeing 2017 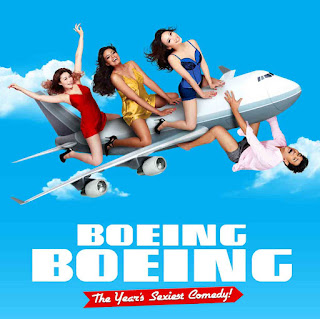 Watching W!ld Rice’s Boeing Boeing in 2017 evoked the same questions before the show. I did not watch the original staging in 2002 but I caught the 2010 staging. It was the second W!ld Rice show I watched after “The Importance of Being Earnest.” Adrian Pang played the lead role of Bernard with Daniel York as Robert. The nationalities of the stewardesses were Singaporean, Hong Konger and Japanese, played by Chermaine Ang, Wendy Kweh and the late Emma Yong respectively. Siti Khalijah played the role of Rosa.

That version was directed by Glenn Goei. It was a very strong cast with Chermaine, Emma and Glenn returning from the 1st staging. I remember that I enjoyed the show tremendously and the show was an eye-opener. It showed me how good Singapore theatre could be. In fact, it was after watching Boeing Boeing 2010 that I decided I was going to start a blog on the local theatre. Fast forward to 2017 ....

Boeing Boeing 2017 is directed by Pam Oei (who starred in the 2002 staging). Rodney Oliveiro plays Bernard with Shane Mardjuki as Robert. The nationalities of the stewardesses are changed to Singaporean, Indian and Mainland Chinese, played by Oon Shu An, Rebekah Sangeetha Dorai and Judee Tan respectively. Bibeth Orteza plays the role of Rosa. I will go more into the acting shortly...

The set of Boeing Boeing is just a living room with many doors. For the 2017 staging, the choice was to have a more Scandinavian look with lots of wood in the walls. It was neat and cosy. Also the doors were very strong considering they were being slammed shut many times in each show. I very much appreciate that the set had several layers. You can see that behind the doors are actual bedroom sets rather than just empty stage. Well done to the stage set guys !! I also so love Victoria Theatre. The closeness to the stage really feels nice and warm. 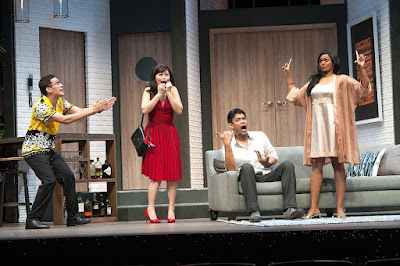 Overall, the acting was good. It is arguable who had the bigger role between the two men. I personally felt that Shane (Robert) had more stage time as compared to Rodney (Bernard). At the earlier parts of the show, Shane was a bit more awkward but as the show went along, he got better. Rodney played the part of Bernard well but I think he could have been better. I have definitely seen him better. Throughout the show, he had the same level of intensity of expression. It would have been good if he was able to show varying degrees of emotion at the different points of the show. When he was confident.. he had a certain look, when he was panicking.. he had the same look and when he was relieved.. the same look. I personally could not feel the emotions as much as I could from Shane. 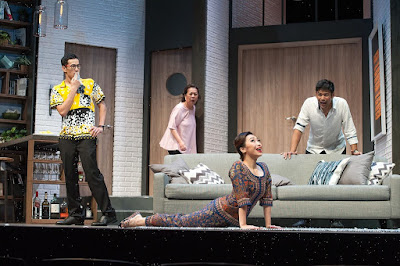 The nationalities of the stewardesses were changed to suit the strengths of the three ladies. Shu An played the role of the SIA stewardess. I can so imagine an SIA stewardess talking and behaving in the same way after they get home. She brought on the laughter with her ‘ah-lianness.’ Rebekah played the role of an Air India stewardess. I felt that this role could be further enhanced. The only thing special about this role was the ‘Indian accent’ and the sari. Even after a while, the accent was lost amongst all the lines. There was nothing there which made her stand our as an Indian girl or even an Air Indian girl. Judee Tan played the role of the China Airlines girl. She really stood out amongst all the cast. She brought the house down with her exaggerated China-English accent and her Opera moves. (I could hear Chua Enlai guffawing) It was really an excellent choice casting Judee for this role.

I feel that the role of Rosa is very important to this show. She is the person who glues all the roles together and provides most of the humour to the show with her constant grumblings and ranting. However, I feel that Bibeth was a bit lacking in this role. It is intentional for her to repeat certain lines as a typical Filipino helper, but I felt that it became rather jarring to hear her repeat the line again and again listlessly. I think it may be the artistic direction for her to appear drained and tired but it just felt boring. I cannot help but remember when Siti was playing this role, she was the highlight of the 2010 show. 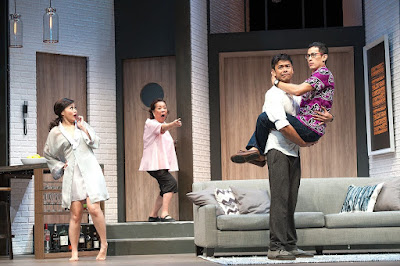 For those of you who have seen the earlier versions, this is pleasantly different but yet comfortably familiar. It is like being on a different aircraft but with the same airline. For those who are thinking to watch it for the first time... it is going to be like taking a flight for the first time...exciting and full of anticipation. Whatever it is, fasten your seat belt, sit back and enjoy the excellent service and hospitality of W!ld Rice Airlines.

Don’t forget the last flight from Victoria Theatre Airport is on 22nd July 2017. Quickly grab your tickets online and check in to Boeing Boeing 2017 before it departs.

I would like to take this opportunity to wish all my Muslim readers Selamat Hari Raya Aidilfitri – Maaf Zahir dan Batin.
Posted by Unknown at 4:15 AM No comments: