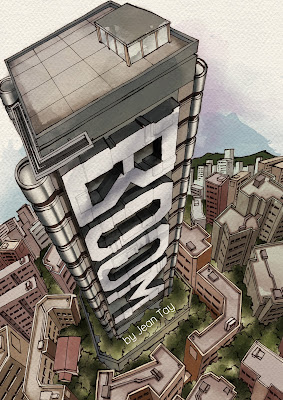 Barely a month since the wildly hilarious TrainStopping … Sight Lines productions have another production coming up – BOOM ! (‘!’ added by me for dramatic effect .. see I can be director / producer / something-er too).. If this production is anything like TrainStopping .. it is gonna be great.


Boom was first and last staged in 2008 and written by Jean Tay. It basically tells of the feelings and emotions of several people (dead and alive) when their homes go en-bloc. Boom has been made into a book and used as an ‘O’-levels literature text for secondary students. The premise may seem rather straight-forward and simple …. But it is in these simple productions where you really see the emergence and strength of good acting and directing.


The cast of BOOM is mainly focussed on the young talents of Singapore Arts. I do see some familiar faces in Andrew and Erwin. I have seen both of them on stage before. Erwin must be like some sort of a superman. This is his 3rd production this year. I have said in my previous posts that I definitely see him to be a big star in Singapore theatre. He is a “cakap bahasa Inggeris” version of Najib Ali in his versatility and poise. (my opinion) With my limited theatre exposure, I have not seen the other cast members before.


The Creative team of Derrick, Jean and Engie need no introductions. Derrick and Engie are a power-packed duo with a very keen eye for details. These minor details (a’la TrainStopping) are what audiences remember and keeps them coming back. For a fledging Theatre company and young directors .. Sight Lines is showing a great deal of promise. Here’s hoping BOOM does well giving a boost to all the young people involved in this…


So please come along .. young and old .. and experience the ups and downs of “forced relocation..” … how “economic development” has led to a loss of heritage and culture and how the dead and the living deal with it …
Posted by Unknown at 4:14 PM 1 comment:

Hi All !!! Sorry for not posting anything over the past few weeks. Work has been pretty much hectic and I haven’t had any time to watch anything …


.. Also .. I wrote to “flying inkpot” applying for a role as volunteer reviewer for the website. The editors went through my blog and gave me many good and constructive comments as to how to improve my writing skills before I can be part of their team. I am still very much mulling over it.


I can very much change my writing style to suit a more “learned” audience but then I think that I will lose part of the charm of this blog. As posted way earlier, this blog is for the everyday people (like me) who seeks alternative entertainment other than cinemas and casinos … underaged girls and pubs .. who wants to enjoy an evening of mixed emotions at a play .. laughing at comedies in the theatre .. and just chilling to the best of Singapore’s arts scene. This blog is NOT meant for Arts & Literature lecturers and students .. NOT meant to critique the acting or the theme … nothing technical here .. just Me telling people what I saw .. what I liked .. what I think can be done better (based on watching other stuff) .. and getting to know people who like what I write.  And I do it all in my everyday style .. using everyday words … This blog was started in December 2011 and since then I have had 4,000 hits (out of which half is probably me!!!).. I just wished that more people will leave comments rather than just read and bugger off. Tell me what you think so that I can write better or more to cater to what you want ..


Anywayz .. if I were to join Inkpot, I will probably have to close down this blog as I do not have the time to write multiple reviews in different styles for one show. <I have a full-time day job … a part-time night job (stop giggling!!!) ..> .. so what do you guys think?
Posted by Unknown at 10:02 AM 1 comment:

In rememberence of Emma Yong ...

Once again, Death has taken away one of the bright and extremely talented stars of the Singapore Arts. I feel this emptiness that I will not be able to enjoy your wonderful singing and acting. Emma, you have all our prayers and hope your suffering has come to an end leaving only Joy and Happiness with God now.

Warmest condolences to your loved ones ...

The following is an exerpt from a poem I read before .. which I feel is very apt during this very sad time ...

.. MRT Excuse Chit ... not Shit ah !! My Review of Trainstopping

I finally caught “TrainStopping” last night at the Old Parliament House, @The Art House. It has been more than a year since I have seen anything @ the Art House and I must say that Sight Lines could not have picked a more apt venue for their debut production. As I was shown my seat (thanks Derrick), I felt like I was brought somewhere else .. away from the hustle and bustle and stresses of life. The mood lighting in the hall (is it a hall??) was calming and so was the music. It was an excellent way to cool down and to prepare the audience for what was about to come..


TRAINSTOPPING !!! This is the first production for Sight Lines, the first professionally staged work under the penmanship of Jeremy Yew and also Derrick Chew’s first foray into the murky waters of directing !! I must say that it came together very well and felt more like a production done by a seasoned production house with a veteran crew. The lines were well written and if caught, you cannot help but chuckle at how they cut deep into the current affairs of the country. Well done to Jeremy who also managed to “redo” the lyrics of so many current songs to “fit” into this revue.


The directorial team also did a good job in putting the relatively narrow and long (portrait-esque) stage floor to good effect. It felt like the actors were up close and personal. There were also all the great small little bits and pieces which bound everything together into the main MRT theme. Good job !


As Trainstopping was touted to be a musical revue of Singapore 2011, there were many skits depicting events in Singapore 2011. There were bits on the recent GE2011 (which were not many thankfully as I feel that this issue had been beaten and killed too many times), the flooding along Orchard Road, issues on Foreign Talent in the most unlikely of places and of course major bits about the MRT incidents. It was also very smart of Jeremy to somehow fit in the message of local culture/art being sidelined in Singapore. With so many skits, there are bound to be some misses. For some of the skits, I felt that the impact was lost because there was either too little impact or too little explained …


The actors on the other hand are all veterans to this industry. It was great to see Darius, Celine and Siti working together on so many of the skits and best of all, combining their voices to great effect. Darius was as usual, funny with his nasal voice (except when singing) and funny expressions. Celine was good but I felt that she could be bit more expressive and less hesitant. It is my opinion that Siti stole the show. She is such a natural in her comedy and it is no wonder she won the 2011 Life! Theatre awards best actress. Her delivery of her lines were accurate and smooth. During her solo skit as a Malay girl going to get married, it felt as though she was talking to the audience as naturally as talking to her best friends. I understand Malay language so I found her Malay jokes / nuances very funny. (KETIAK BUSUK!!!)


The one issue I had with Trainstopping was the sound quality. It was at times quite difficult to hear the lines clearly because they were either muffled or drowned out by the loud music. This may also be due to where I was sitting or the acoustics in the venue. (ed : Who plays loud music in parliament???? LoL) Looking at some of the puzzled faces of the other people in the crowd meant that I was not the only one having some issues with catching the words. At certain parts, the lights were pretty glaring as well. Also because of the colors picked for the stage lights, it seemed as though the actors were in 3D !!! (might be my eyes???)


In conclusion, Trainstopping was a well put together and the music lines really played into the actors strengths. It felt very relaxed and though there were some misses, I can guarantee that there are enough hits to make your evening. Do not expect a show of loud, bawdy laughter .. but more a revue of good music, chuckles and giggles on the funny events of Singapore in 2011. Good job to the “virgin” writer, director and Sightlines. I hope to see more soon …

Anywayz folks .. pls get your tickets at www.bytes.sg and GET THEM SOON as you have only 3 more days !!! No excuses .. MRT breakdown ALSO you must get there !!!
Posted by Unknown at 3:08 PM 4 comments: