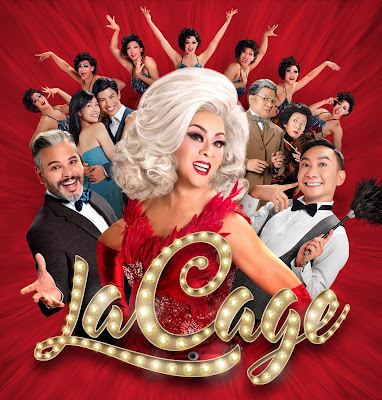 As readers of my blog will already know, I caught the 2012 production and got a rave review by me. Until today, it is one of the best locally produced musical I have watched in Singapore. The 2017 production? ... Excellent.

You can read more about La Cage here in my preview of this show. Today, its all about the review.

Let me start by asking you this .. What makes a great musical? Superb acting, beautiful singing, a dash of humour and lots of heart. W!ld Rice’s La Cage Aux Folles had all this and more.

Victoria Theatre is the perfect venue for the staging of La Cage. It is small and yet cosy. The close proximity of the audience to the stage brings a level of ‘intimacy’ with the actors. I was seated in the Circle seats on the second floor but yet I had full view of the stage and could feel the warmth and emotion from the show. 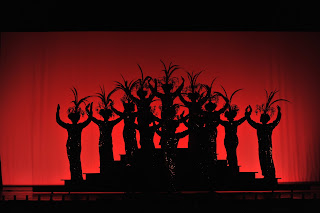 Firstly, let me start with the Cagelles. I have no idea how they can be so graceful IN HEELS. They were doing splits, can-can, burlesque and even cartwheels. Their feet must be aching like crazy now!! They are very good and I especially liked the ‘tap’ routine. Kudos to you guys .. your hours of practicing have paid off with your spectacular routines.

The lead actors, Ivan Heng and Sean Ghazi were superb. I cannot think of anyone in Singapore and even in Asia who can play the role of Albin / Zaza except Ivan Heng. The flamboyance, the mood swings, the emotions, the singing ... all perfectly performed by Ivan. The role of George involved more singing and Sean Ghazi did not disappoint with his voice. His rendition of ‘Song on the Sand’ and ‘Look over There’ was just breathtaking. I could see other members of the audience dabbing their eyes moved with emotion at his singing. The on stage chemistry between the two leads was good but I feel that this could be improved. This is understandable as this is only the second night, as the show goes on the chemistry should grow. However, please do not let this minor point take away the due praise I have for the two lead actors for their excellent performance.

The supporting cast provided most of the comic relief throughout the show. Hossan Leong was his usual impish self which we all love. I feel that Aaron Khaled as Jonathan’s acting and singing could be stronger with more emotion. From where I sat, his singing was often muffled and drowned out by the music. (edit - at my second viewing of La Cage, Aaron Khaled was excellent and his singing was spot-on. His rendition of 'Look over there' brought tears to my eyes.) Jo Tan brought a lot of laughs from the audience and Darius Tan did a good job as the ‘stiff’ Dr. C.K. Tan (pun intended). Congratulations to Mae Elliessa on her Singapore stage debut. Her role as Ann was too short for me to comment but I could see she definitely has the potential to be excellent under the tutelage of the W!ld Rice team. I expected more stage time from Erwin Shah Ismail. I have always maintained that he is one of the future stars of Singapore theatre.

A special mention MUST go Frederick Lee the costume designer of this show. The costumes are breathtaking. I normally have photos of the show in my review, but for this review I decided not to so that the audience (who read this blog) can be as awe-struck as me by Frederick’s super work. 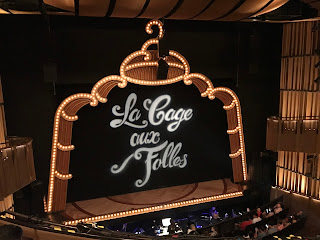 I strongly urge / recommend / coerce / influence / force you to go get tickets to La Cage if you haven’t. The show will run until the 13th May 2017. As I understand there are not many tickets left so quickly log on to SISTIC and get your tickets. This is one show you mustn’t miss, in fact try to catch it several times !! I will be catching it again tomorrow afternoon and if time permits I hope to watch it one more time before it ends and I have to wait 5 more years.

Thanks again to W!ld Rice for this awesome production of La Cage. You have showed me once again what Singapore theatre is capable of.... La Da Da Da ... and I am young .. and in love....
Posted by Unknown at 2:39 AM No comments: