Please Tie Me Up !! My review of Michael Chiang's High Class. 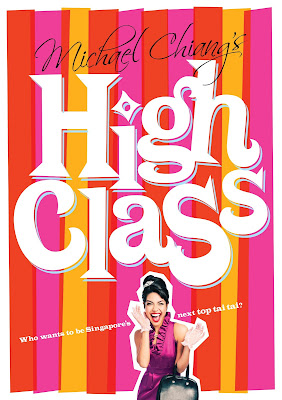 Review of Michael Chiang’s High Class by The Presenting Company


I was rather disappointed with “High Class.” Why? I had bought a pair of Stall Tickets but then just before the show, there were some Circle Ticket holders being upgraded to Stall seats. I guess the matinee show … second last day of the run … tickets were not selling well. But then … grr … never ever happened to any other shows I have been to .. matinee or not .. even on last day !!! (Just a small irritation). What irked me more was that maybe I was unlucky to attend the show when they were two alternates. Both Elizabeth Lazan and Siti Khalijah were replaced. All through my blog you can see how much I like Siti’s acting .. and she was one of the main reasons I bought tix to High Class .. but little did I know … strike Toto also not so lucky. I think they should put up on the Sistic website when the members of the cast are going to be not acting then the audience will buy tickets on the dates accordingly. All these left a bad taste in my mouth as the show started.


Now .. onto the show. It was a single set show … with the ingenious use of a rotating “stage” on the stage. This “stage” was used as a bedroom, “stage” and also a seating area in Sentosa Cove. The storyline to High Class is a very simple one .. 5 girls wrongly selected to be groomed to be Tai-tais in a new reality TV show. The show is to be hosted by an obscenely rich former Tai-tai. The show was sabotaged by her ex and new lover .. which goes all wrong and bites the new lover … ex realises .. dumps new lover .. suddenly many suitors turn up for the Tai-tai. What about the 5 contestants? They all decide which millionaire they want to marry after being groomed. Anyone expecting a twist to the end or more depth would be disappointed. I feel that this play is more suited for an audience seeking to enjoy 2 hours of slapstick laughter. The jokes were mainly based on the “actions” and “accents” of the 5 contestants rather than witty lines. The first half of the show was pretty slow and thin .. the second half of the show was slightly better.


To me, there were two things which kept the show above water. Firstly was Nikki Muller .. 2nd was the music.  High Class had a cast of more than 10 members. The 5 contestants were just average with Audrey Luo providing some laughs as Ye Feng. I have seen Mina Kaye do better in other shows and Serene Ho was just downright over-acting ! As for Gloria Tan who played the role of Azizah, she was trying so hard to be Siti Khalijah. I could just picture Siti fitting into the role so naturally and I bet the lines and acting were based on Siti’s strengths.  Sorry Gloria, no offence but there is only ONE Siti Khalijah. I can also assume that Elizabeth would have been a better fit for the role of Sunita. As for all the other cast members, they were there, did their stuff but nothing really memorable. Nikki Muller … this is the first time she has gone on stage.. but SHE WAS GOOD. Her stage presence was strong and her singing, wonderful. Her acting and singing really blew everyone else out of the water. Not only was she head and shoulders over the others (literally .. she is tall!!) but the others were not even on the same planet !!! You could really picture her as this ex-tai tai .. with her poise and elegance. When she sang, it was with heartfelt emotions and confidence. She looked like she had been doing this for years !!


The music for High Class was arranged and composed by Mr Don Richmond (who so happens to be my ex-classmate in SJI). The tunes were catchy and fitting. The ‘tai tai me up’ song is still playing in my head and the ‘end of school’ number was rather Grease-esque.


As High Class’s run ended yesterday, this review will not serve much but solely MY opinion of the show.  High Class, to me is not a show I will watch more than once (unless I want to see Nikki Muller again) … I was honestly quite tempted to leave halfway … but then thankfully, I stayed on … it was enjoyable (towards the end) and quite ok. I guess my earlier grouses (see first paragraph) kinda tainted my experience. But isn’t that theatre … a culmination of all the senses into a wonderful experience? Sorry not here …
Posted by Unknown at 9:33 AM