I still want my Kuih Chang ... my preview of Grandmother Tongue 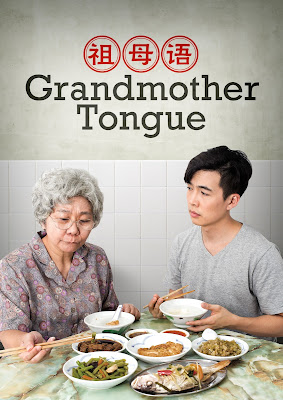 There is a lot of evidence that a particular language has a strong impact on its culture and vice versa. Language refers to the words used, the sentence structure, intonation of words and etc. For the Chinese people especially here in Singapore and Malaysia, the Chinese language is split further into the various dialects of Hokkien, Teochew, Cantonese, Hainanese, Hakka and Mandarin. It is extremely fascinating to see how words and structure and tone are associated to the common seen traits of their respective cultures.

Another example of the close intertwining of language and culture is the Peranakan or Baba Nonya people. The language is mainly Malay with a generous splattering of Hokkien, English, Portuguese, Dutch and Tamil. This is because the Paranakans originated from Malacca and Penang during the colonial days in Malaysia. They were originally Chinese in descent but due to interracial marriages with Malays, Europeans and Indians in those times, the Peranakan culture was born. An example would be the words ‘kuih chang’ which is a combination of a Malay and a Chinese word. This perfectly exemplifies the Malay-Chinese culture of the Peranakans.

Sorry for the LONG introduction but this brings us to the upcoming play by W!ld Rice called Grandmother Tongue. This was written by Thomas Lim who wanted to show the close inter-relationship between a language and its culture. Thomas Lim wants to show via conversations and interactions between a grandmother and her grandson the Teochew culture. This play was last shown at the 2016 Singapore Theatre Festival and tickets were sold out weeks before the performance. Tickets to additional shows were also sold out weeks before. This show promises to bring on the laughter, tears and the lightbulb moments (sometimes all at once). The 2017 production is again directed by Thomas Lim with a tiny cast of 3 people. The show runs from the 28th September to the 21st October and will be held at the SOTA Studio Theatre. The latest information I got from W!ld Rice is that tickets for all the shows have been sold out. However, they may be adding more shows. So in order get tickets, kindly email to sales@wildrice.com.sg with your name, contact number, choice of performance dates and number of tickets. They will then contact you should seats open up or should there be additional shows. Also don’t worry if you do not understand Teochew. There will be surtitles in English and Mandarin. QUICKLY EMAIL THEM !!

I really hope that W!ld Rice will find a way to add more shows because I think it is very important for us to remember and treasure our culture. The Chinese dialects are quickly disappearing as the younger generation is focused only on languages they learn at school and not at home. With the disappearance of the language comes the disappearance of the culture. I for one will surely be very upset when ‘kuih chang’ disappears. I will surely be watching this as my Grandmother’s tongue is ... Teochew…
Posted by S.Drama.Mama at 12:40 AM